Skip to Newsletter >> For the latest News, Views, Comments and Reports. 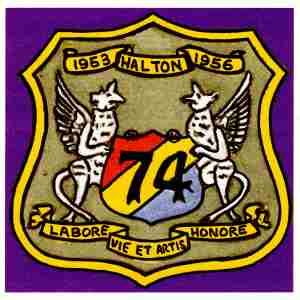 Regular visitors to the Website may skip to the Newsletter by selecting the above link. Your comments, suggestions, queries, complaints, and compliments will be welcomed.

Please contact the Entry Association if you are 74th Entry and have not previously been in touch, or if you wish to get in touch with any of the entry members. We welcome all ex 74th no matter whether you left us before passout or came down to us from a previous entry.

In 1997 the Rev Richard Lee, who was the RAF Church of England Padre at St Georges Church at RAF Halton, suggested that the RAF Halton Aircraft Apprentices Association encourage its members to install stained glass windows in the church to commemorate their time at Halton. The idea was welcomed and soon Entry windows were appearing in glorious coloured glass: each telling something of each entry's time at Halton.

The window depicts the Crown surmounting the acclamation "Coronation Entry 1953 to 1956" above the Entry badge which shows the three Wing colours (The 74th was the Senior Entry when all the entries were distributed around the 3 wings).

The Apprentice Wheel, which will always be the true "Trademark" of Halton Apprentices, is shown in the lower quarter, the whole is set on a light and dark blue background representing day and night, with stars set in the night sky.

The 74th Entry started it's training in the summer term of 1953, on April 28, in No 1 Wing, and was proud to be on parade, at Halton, on the 2nd of June, the day of the Coronation of Her Majesty Queen Elizabeth the Second.

If you are wondering what it is all about: we are ex-Aircraft Apprentices of the 74th Entry, No 1. School of Technical Training, RAF Halton. That was over fifty years ago - can't believe it!

It all started for us in April 1953 when we arrived as sprogg brats to begin induction, kitting out and three weeks full time square bashing, after which we enjoyed three years part time square bashing interspersed with bouts of technical training and education. Our off-duty hours were spent pursuing sports, (avoiding sports), hobbies, charping on one’s pit and visits to the Tank or the Astra. Remember the tanner crush?
Or perhaps time was spent doing Jankers?

Workshops Schools and learning to live together, Bulling everything in sight and cursing the D.I's, filled our working hours. For promotion, a lad may first be given a Snag then rise in the ranks to Flight Sergeant Apprentice.
On the 28th March 1956, the 74th Entry passed out.

For Civvy Visitors: Technical terms used on this page.

On the off-chance that you are not an ex-RAF Halton Apprentice here are some useful definitions of words and expressions used on this page. Many are unique to Halton Apprentices others in common usage in the RAF.

Name given to any Aircraft Apprentice or Boy Entrant - more correctly Trenchard's brats after Lord Trenchard who founded the aircraft apprentice scheme in 1922.

Marching and drill on the parade ground or square.

Dozing off on one’s bed in the barrack room.

The NAAFI Canteen at RAF Halton. Term used uniquely by apprentices at Halton. Origin much debated.

Cinema on an RAF camp is always called the Astra.

A rough queue formed at the side of the Astra where admittance was only sixpence (tanner). Much jostling and barging in from senior entries.

Polishing everything that moves or stands still. Boot toecaps like mirrors. Much of our seven shillings and sixpence a week pay went on cleaning materials.

Drill Instructors. Always memorable. Gave the apprentices gentle encouragement with what they would do with their Pace Sticks.

The colloquial name given to the punishment for committing a minor offence such as dirty brass buttons, late on parade, caught wearing civilian clothes, untidy bedspace, room job not done properly, caught outside the Block after lights out (at 21.30 hrs), absent from parade, smoking etc. If you were caught, then you were charged, marched in before the Squadron Commander and given 3, 7 or 10 days CB (confined to barracks). The Apprentice receiving this punishment was called a Janker Wallah and he would wear a White armband throughout his sentence. Typical Jankers timetable:

A stripe worn on the arm indicating a Leading Aircraft Apprentice.

The spirit of the 74th lives on.

Thanks lads. Meeting you all those years ago gave me a great start in life.