I sent over 100 cv's and had lots of replies leading to 5 job offers. This was printed by the padre at Wattisham, my last tour of duty posting. 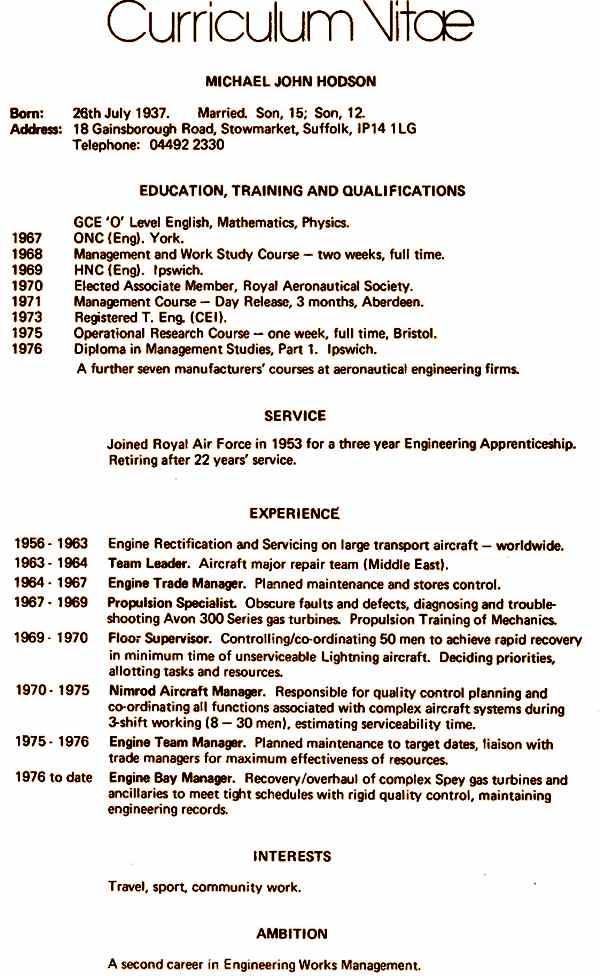 I started civilian life as factory supervisor in an engineering company, (deputy to the works manager) that was making Precision commercial sewing machines and vehicle washing Machines. A company flat, foc, until I moved house. Promotion soon followed and I took over the Tribonomics division (metal finishing - subcontract) of Osro Ltd, as manager. I had to report to the board monthly. The accountant was always behind with his figures, so they took notice of mine!

Then I had some good fortune as I was given a company car, a Ford Mk 4, not new, but a car I had thought of buying for myself. This was one of my ambitions. No more Petrol to buy! The business was going well, and I was happy until 1980 when I heard the company was going to be sold. I was not happy about this and left before the sale to start my own company, Omniwood Ltd with a customer of mine in Hertford.

He was an accountant by profession and was experienced in press work and electroplating. A good synergy. This business was started as metal finishing but without the press work. I Had the opportunity to purchase Skinners (EP) Ltd in Luton in 1982 from a PLC. Have expanded and developed by many acquisitions over the years. Servicing customers over a radius of 100 miles around Luton.

Dealt with most manufacturers that are household names as well as hundreds of engineering firms. Ford, Vauxhall, Smiths, B & D, British Aerospace to name a few. A very interesting and varied life which involved solving customers problems and working to tight timetables and small financial margins. A very competitive environment.

In the mid-eighties I had a good contract with Rank Xerox 24/7 operation for 2 years. This was unusual as most companies did not give guarantees of work. From 1996 trading became more difficult with engineering parts sourced from China among other overseas suppliers. Was able to sell the freehold and start to close the operating companies from December 2004. Finally retired in October 2005. 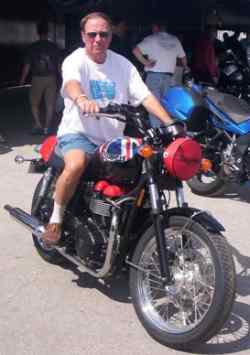 My first bike, and I expect we all remember that one, was a BSA 350cc B31 model. The year was 1955 and I was still under training in the RAF.

As an enthusiast for all things mechanical, especially engines, I like many of my peers, wanted a motorbike. Although not allowed by regulations, it was kept some three miles away from the camp on a farm.
As soon as I was qualified as a junior technician (one stripe) and posted to RAF Lyneham, I bought my first Triumph. This was a 1951 Speed twin (5T) in April 1956.

After a year, I and some friends were enthused by the Vincent mark and so I bought a 998 Rapide and then a Black Knight. Then the publicity, I believe in the green or blue magazine, led me to Triumph again. (how many times have I been asked "why did I sell"!).

1958 was memorable as I was courting and the T100 C, a new model, first available in 1957, was to become mine in June 1958. This was a rapid bike for its day and a very high revving machine. I still consider this one the best looking models along with the T110 of that time.
I still have the road test in the green one today. I particularly liked the manual ignition to retard the spark at slow running!

Not with any prior reason I swapped it for a T21 at the dealer after four months and 7,500 miles. This 350 had come from the factory and was registered as YWD 21 a Coventry registration.
The clutch cable broke as I left the 1958 motorcycle show at Earls Court. Suffice to say it was underpowered and by March 1959 I picked up a new T100 registration TAM 170.
This was in the optional Black and cream colour scheme. This was to be my last Triumph before marriage and was sold in September 1959.