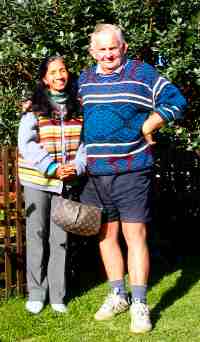 The photograph is of me and my wife Vangie on ANZAC Day April 25th. 2005

RAF Halton Aircraft Apprentice 588564. Three years of almost sheer and utter boredom. However, the lessons learned - those of camaraderie and toughening up, prepared me to face the many and various vicissitudes that life had in store for me. Thank you Lord Trenchard.
In June 1957, the alarm bells rang - that Sandys White Paper reducing the size of the RAF.

As much as I wanted to leave pronto post Sandys, I still look back upon my time in the RAF as being, relatively speaking, pretty good.
It was the RAF that made me. I feel sad for the youngsters these days - no standards, no discipline, no respect, and no intestinal fortitude. (aka "Guts").

In September 1956, I arrived at RAF Celle BAOR 23 as a Junior Technician. I was housed in "Patton Block". Glory?
For the purposes of work, I was placed in the "Modification and Repair Bay".

After some weeks grappling with that which passed for "work", I became involved in changing Canopy Rails. This became a "speciality". At the rear of each rail, there were two 4BA countersunk bolts. Because of where the latter had been placed, then to remove the rails, it was necessary to remove the gun-pack, main fuel tank, and jet-engine. This gave good opportunity for the control cables to be cleaned and inspected for damage. For a job that took only a few minutes to complete, a morning's work was required.

After the new rails had been fitted, it was necessary to refit the engine, fuel-tank, and gun-pack. Then the engine had to be run so as to check for any leaks in the fuel system. This necessitated my being required to lie under the fuselage and check each coupling and having a good look up into the space between the fuel tank and fuselage. When the engine was running at high speed, the fuselage moved towards the ground. This took some getting used to.

Another "speciality" of mine was to change the Air-Conditioning Unit. Fortunately, my small hands came in useful as access to the ACU was not all that straightforward, it being skewed at some odd angles. Not only that, but the access aperture, on the upper surface of the port wing, was effectively smaller than the ACU. Patience proved to be a virtue.

From these two jobs, I learnt that accessibility was a key to decreasing any turn-around time. In hindsight, this is obvious, but then not.
Then came another regular job, and that was to change the Windscreen. Rubber strips, Bostik, and bolts.

Regarding Celle BAOR 23, it was there that I was seconded to the "New German Airforce". This was only for a few weeks. Herr Majeur Schmidt was proud of his twin-rotor helicopter. He paid me DM20 / week in cash for my efforts. Herr Majeur was a gentleman.

More Moves - Then Back to Great Britain and Promotion.

Rifle shooting was of great interest to me - Bisley and all that. When in Germany, I was a member of the 2nd. TAF rifle team - earned a 2nd.TAF badge for my blazer.

One kindly Warrant Officer was instrumental in determining the nature of my (limited) talents. I was subsequently employed in a more suitable (to me) environment. Thinking.

The RAF gave me every opportunity to educate myself. "I did it my way". I gained the Technical Teachers Certificate whilst an Instructor at Weedon (INSTR - I Never Stop Talking Rubbish).
Then on Wednesday September 21st. 1966 - end of RAF. "Here we go again".

Studying Engineering at Brighton and Beyond.

September 1988 - redundant. Seemingly too highly-qualified (sins of effort) and too old. Consultant engineer. Wrote book. Retirement.
In NZ terms, I am a "Returned Serviceman".

I have three children.

On the RAF in General.

Overall, I am very proud indeed of my time as a member of Her Majesty's Royal Air Force.

Duncan Sandys, as Defence Minister in the Macmillan government in 1957 practically ruined the British aircraft industry by proclaiming that the day of manned aircraft had passed, and that rocketry was the way of the future. All aircraft research and development were cancelled. His White Paper (a report outlining Government policy) cancelled all manned combat aircraft projects in the pipeline.
Not good news for our future in the RAF!

Indicated by inverted Sergeant's stripes. Introduced in 1950 for Sergeants in Technical trades. Senior Technicians reverted to the rank of Sergeant in 1964.

BACK to main text.