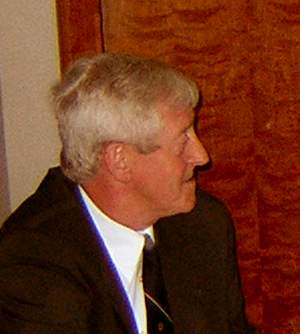 The 74th, including me, graduated on 28 March 1956. I remember the pride I had in wearing the single inverted chevron of a Junior Technician. I remember the motorcycle escort to the Entry banner on the square after the prize giving ceremony. Who else had a bike on parade? A photo of me on my BSA A7, with Bill Heather on the pillion has been lodged in the Trenchard Museum. The Museum also houses our Entry crest, a rigid version of the blazer badge, along with the crests of many other entries.

I Met Valerie at the Old Time Dancing Class.

In September 1955 I met Valerie at the old time dancing class in Halton Village hall. She had gone for the first time with a friend who had arranged a blind date for her with a friend of her friend. This friend of a friend was also a Brat (73rd I think), however she preferred me (poor girl) much to the annoyance of the other chap who subsequently tried to warn me off! It was for me an enchanted evening when I saw the stranger across the crowded room (sorry, I could not resist a bit of nostalgia).

Posted to RAF Watton with Bill, Jim, and Mick.

After graduation I was posted, along with other Engine Fitters, Bill Heather, Jim Juett, Mick Lorrison and sundry bods of other trades, to RAF Watton in Norfolk about 20 miles west of Norwich. We were all raring to be let loose on the RAF's aircraft, and to enjoy the pleasures of Norfolk.

One summer afternoon, Wednesday sports day, a group of us went to a boatyard and hired a small sailing boat. We sailed along the river for about an hour with a following wind and took over two hours to tack back to the yard against the wind. Ah, happy days!

At Watton I worked on Lincoln, Varsity, Canberra and Comet aircraft, Merlin, Hercules, and Avon engines respectively (but you probably know that). Apropos Wednesday afternoons, on one occasion we were servicing a Merlin, setting the tappets, on refitting the camshaft cover, 48 nuts, spring washers and plain washers on 48 studs, the last stud sheared on torque loading. That spoiled the afternoon off as we had to return to work after lunch to remove the remaining 47 nuts etc, remove the cover and the broken stud (it was sheared sub flush to the cover) fit a new stud, refit the cover and re-torque the 48 nuts. No time for sailing that day.

Val and I were married in August 1957 and started life together in some grotty digs in Norwich. These we tolerated for a few months and Val returned to her parents and me to barracks. The following year we bought a caravan and had it sited about half a mile from the camp gates.

A Big Decision to Make.

After a while I realised that service life was not for me as a family man, our first child was on the way, so I purchased my discharge for the then huge sum of £200 and left the RAF in May 1959.

Our daughter Jane was born in June 1959. We lived with Val's parents for about two years until we again bought another caravan (22ft x 7ft) and lived in it in the Chesham area, about 10 miles from Wendover.

After Leaving the RAF I Had Four Jobs

In the first 10 months after leaving the RAF I had four jobs, detail fitter, general fitter, motorcycle mechanic and then as an engine fitter with a firm that had the contract to maintain RAF aircraft at Bovingdon. For the two years that I was with Short & Harland I worked on Ansons and Meteors, Cheetah and Derwent engines. From there I moved to De Havilland engines testing the Gnome, a small gas turbine engine for Whirlwind and Wessex helicopters.

Our son lain was born in November 1962. On Boxing day that year it started snowing, a day late for a white Christmas (but who is dreaming) and did not thaw till mid-March. Washing, particularly nappies would freeze solid on the line in about five minutes. The situation in the caravan was not tolerable with the two children, so Val went to stay at her parents again. I remained in the caravan as it was much nearer to my work. It was so cold that the liquid calor gas would not vaporise unless one poured hot water over the regulator valve, but to get hot water you need the gas to boil the kettle to pour the hot water etc etc On one memorable occasion, a hot water bottle that I had left in the bed froze solid even though it was under four layers of blankets!

Our First House in Wendover.

From the caravan we moved into a council house in Wendover at Easter 1963. Bliss four brick walls, flushing toilet, bath, hot and cold running water, oh joy. In 1967 we bought our first house in Wendover, off the top of the High Street, it backed onto the railway. We have had several moves and various houses in the intervening years, in Wendover and Haddenham, until December 1987 when we settled in Stoke Mandeville.

De Havilland Engines became Bristol Siddeley Engines and subsequently Rolls Royce Small Engine Division during my time with them. I left in 1967 and tried a new profession selling double-glazing. After two weeks I realised my mistake and had to find a proper job in quick time. I became a progress chaser liaising with component and piece part suppliers with a company called Instron Ltd, in High Wycombe, who manufacture materials testing machines. I subsequently became a Draughtsman (one of my better subjects at Halton schools) after a spell as an assembly fitter in their factory.

After gaining confidence with pen, pencil, compass and set square I left Instron to work as a self-employed contract draughtsman, obtaining work through various agencies that abounded in the 1970's. The best contract actually lasted nine years. I was working at the MoD in London in the Naval Shore Telecoms Agency. You may say what is an engine fitter doing in telecoms? Well a job is a job and the secret with temporary contract work is to appear confident and willing at the interview.

The Un-civil Servant That Did Me a Favour.

The work involved designing the layouts and installation requirements for Navy Shore communications facilities. Unfortunately, I think I upset my section leader, a rather abrasive civil (if the word civil applied to him) servant and was invited to depart. The department head offered me three months’ notice in recognition of my nine years but 1 found another job in less than a week. I think that section leader actually did me a favour as I greatly reduced my daily travelling (100 miles round trip to London).

I Moved on to Computer Aided Design (CAD) Work.

In May 1987 I started with Cossor Electronics, subsequently Raytheon Systems Ltd, who had the SCIDA task for the then new NATO bunker at HQ Strike Command, RAF High Wycombe. The Systems Co-ordinating Installation Design Authority was an organisation set up by the MoD to co-ordinate the installation requirements of all the agencies, equipment suppliers and operators for the new building. I had an excellent tutor (a lad not much older than my son) and soon became proficient at CAD, bye, bye pens and pencils.

After about 3 years I became the Principal Installation Design Co-ordinator, a long title with a nominal salary. I designed many changes to requirements in the subsequent years and thoroughly enjoyed working with the RAF. I think it was the best job that I had in my working life.

A change of contracting company in 1998 led to my redundancy (I did not like the terms of employment that the new company was offering) with four years to go before my state pension. I found a place in a local firm of building services specialists who needed a CAD man. I was with them both full and then more progressively part time for two years. I then did some private work from home for a couple of local companies until a grateful government started paying my pension in June 2002.

Our daughter Jane has two children, Jodie, 10 and Anthony, 7 (poor boy named after me) lain has four, Matilda, 8, George, Olivia, and Florence, 6 (yes all are 6, triplets). All six grandchildren are lovely. The great thing about grandchildren is that you give them back to their parents!

Val Was Diagnosed as Having Multiple Sclerosis

Sadly, about seven years ago Val was diagnosed as having Multiple Sclerosis, with which she is coping brilliantly. It does however restrict her activities somewhat as it causes her to become very fatigued.

Hobbies and Lots of Morris Dancing.

By way of hobbies, Val and I are into dolls houses. Proper scale model houses at one inch to the foot (1:12 scale). We have a Victorian village shop with attached house, six rooms on two floors, which has been ongoing for about nine years. The current project is a village pub, also Victorian in period, five rooms on three floors, which has so far taken nearly two years. I have in mind to complete the village with a school, time and tide permitting. My other hobby is Morris dancing. I have been a member of a side near here for eighteen years; yes, I only took it up in my fiftieth year! It is great fun; good exercise and you get to visit some good pubs.